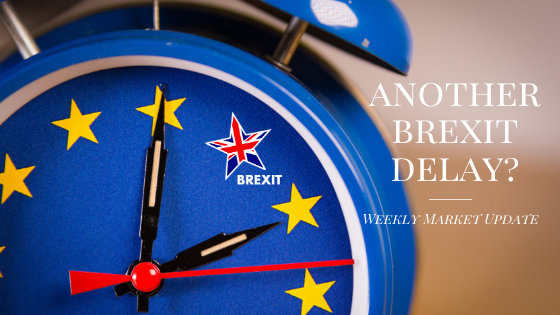 The United Kingdom’s (U.K.) withdrawal from the European Union (E.U.), or Brexit, is stumbling along, and another delay looks increasingly likely.

The U.K. Parliament’s  “Super Saturday” voting session last weekend failed to deliver a decisive outcome as members of parliament (MPs) voted only for an amendment that stated that they would be able to fully scrutinize the proposed deal prior to any vote on whether to approve it.

This delay forced Prime Minister Boris Johnson to send a letter to the E.U. to request a three-month extension to the October 31 deadline, a move he had been adamant that he would not make. To circumvent this contradiction, Johnson had his office send the extension request letter unsigned, along with a signed cover letter stating that he did not want a delay and would not negotiate one. There was also a third cover letter making clear that the extension request was from Parliament, not the Prime Minister or his Conservative Party government.

European Council President Donald Tusk received the letters and is consulting with E.U. leaders on how to react. While E.U leaders are said to be frustrated with the repeated delays, there is very little appetite to deny the extension request in case that could cause a “no deal” or “hard” Brexit, in which the U.K. would leave the E.U. without any agreement in place.

Meanwhile, the Withdrawal Agreement Bill (WAB), which outlines the “finer details” of how Johnson’s deal would be legislated into U.K. law, is set to be debated in Parliament this week. This comes after Johnson’s latest request to have a “yes” or “no” vote on his Brexit deal was rejected on Monday by Parliament’s speaker of the house. Once the debates are complete, the vote on Boris Johnson’s deal could remain too close to call, with almost equal support from MPs for and against currently.

Time may be running out, however, with bills of this type normally taking weeks to run through Parliament. As such, a delay seems to be the most likely outcome. In our view, that’s the best-case scenario for global financial markets in the near term. Investors have seen this before—the Brexit deadline has been delayed multiple times up to this point.

“We expect this to continue to be a drawn-out process, and while there is still uncertainty as to when and how Brexit will occur, the impact to the global economy should be minor—especially as the likelihood of a hard Brexit appears to be fading,” said LPL Financial Senior Market Strategist Ryan Detrick.

It’s important to remember that while Brexit could have implications for the global economy and markets, the U.K. is a small part of both. U.K. stocks, which would bear the brunt of a Brexit sell-off, comprise less than 5% of the MSCI All-World Country Index, as shown in the LPL Chart of the Day.

The opinions voiced in this material are for general information only and are not intended to provide specific advice or recommendations for any individual security. To determine which investment(s) may be appropriate for you, consult your financial advisor prior to investing. The economic forecasts set forth in this material may not develop as predicted.

All indexes are unmanaged and cannot be invested into directly. Unmanaged index returns do not reflect fees, expenses, or sales charges. Index performance is not indicative of the performance of any investment. All performance referenced is historical and is no guarantee of future results.

Investing involves risks including possible loss of principal. No investment strategy or risk management technique can guarantee return or eliminate risk in all market environments.

This Research material was prepared by LPL Financial, LLC.